If you aren’t aware, the state of Nebraska is under water. Millions of dollars have been lost in livestock and crop loss due to Nebraska floods on farms and homesteads. It seems odd that the media isn’t talking about it more than they are, but at the same time, if America really truly knew how this could impact the entire nation, there might be an outcry.

That’s where we try to bring you knowledge at Homesteaders of America. And the cold hard fact is this . . .

Our agricultural system is fragile, and it took a major hit this past month to an already deteriorating infrastructure in our country.

Let’s break this down a little more, and then talk about how it can affect you, and why it’s so important to learn more and more about homesteading, and how you need to prepare for more flooding to come.

Nebraska Floods: How It Affects Everyone

I think one of the worst things about the Nebraska floods are the amount of deaths in livestock. Over 1-million cows have been lost in the floods. That’s not a small number, by any means. Farmers had to move quickly when levies broke and flood waters rushed in. Because of that, so many of their herds were lost in devastating flood waters.

Over a million head of livestock have been killed in the Nebraska floods. One of the country’s biggest sources of beef and pork, the midwest, could lose 50% of its farms this year due to flooding. This means we’ll see meat prices increase at the grocery stores, and meat shortages as well (depending on your location). While it may not happen immediately, it will happen.

One farmer lost 700 hogs in the March 2019 Nebraska floods. Can you imagine losing your entire livelihood in less than 30 minutes? He did.

Over $800 million in livestock and crop loss is expected, and probably even more than that.

As if the $800 million loss isn’t bad enough, farmers were already stashing away grains and crops due to the U.S.-China trade war. Almost all of these storage units have been destroyed or contaminated in the recent Nebraska floods. Which means no real income for the farmer, and an extremely large hit to their livestock feed source. Soybeans were the single most valuable U.S. agricultural export crop. China bought $12 billion worth a year from American farmers. But Chinese tariffs have almost halted the trade, leaving farmers with crops they are struggling to sell for a profit. (Source)

Besides that fact, farm bankruptcy in 2018 was already up 19% from the previous year. It’s no secret that the American farm is dying. I wrote about that recently in my article, How Homesteaders Can Save the American Farm. I encourage you to read it after this article.

Now, the farms that were on the brink of bankruptcy, but still holding on, have every reason to file for it due to the substantial loss they were already taking, and have taken from the recent flooding.

The Soil is Ruined From Flooding

In 2018, Virginia saw multiple 100-year floods in several months. It was absolutely unheard of. A neighboring farm of mine had acres and acres of pasture flooded. The pasture is now completely desolate and covered in silt and feet of sand. Yes, feet of sand. This is something we don’t think about when it comes to flooding.

Even if the flood waters recede and the land dries out, the amount of top soil that will have been eroded or changed will be a killer to so many of these farmers. They have worked years, if not generations, creating top soil and good ground for their crops and livestock. Now, pastures will have to be amended. And with the looming threat of more rain and flooding, many farmers are wondering if it’s even worth it.

An estimated 50% of farmers in the mid-west will not try to rebuild or restore their farmland.

Grains and Crops Are Gone

As of Dec. 1, producers in states with flooding – including South Dakota, Nebraska, Kansas, Minnesota, Iowa, Missouri, Wisconsin and Illinois – had 6.75 billion bushels of corn, soybeans and wheat stored on their farms – 38 percent of the total U.S. supplies available at that time, according to U.S. Department of Agriculture data.

This is where we really start seeing effects on just about everyone in our country. A large percentage of the grains that come from the midwest are now gone. These grains produce the breads and products that the average everyday person consumes from the grocery store. If you’re a homesteader, it may not affect you as much, but ultimately, it will.

The grains that your livestock eat on a regular basis, unless harvested locally, more than likely come from the midwest. This is why it’s so important to find a local supplier for your livestock feed, wheat, and oat necessities. Of course, if you’re in the midwest, having a local source isn’t an option right now. And that is extremely unfortunate.

More than anything, farmers in the mid-west are struggling with having to feed the livestock they could save, because all of their grains and hay are gone. This dreadful impact will be felt for years to come.

So How Does the Nebraska Floods Affect You?

If you’re already growing your own food in your backyard or on your farm, you might be wondering how this affects you. In many cases, it may not even touch you. But it’s best to be aware of what could happen in the coming year, especially if it continues to rain and flood like NOAA is suggesting it will. It’s also good to know what’s coming in your area in regard to weather this year, which we’ll also go over. It’s best to be prepared!

For starters—as mentioned before—grains such as corn, soybeans, and wheat have seen at least a large loss (for our entire country) in March from the losses of mid-west farmland. These grains are used extensively for livestock feed, and some is even sold to big companies to produce products that you purchase in the stores. More than likely, if you’re eating an organic diet, you may not see much of a difference in your grocery shopping, as many of these farms are not organic farms (that I’m aware of). However, the loss of grains does have the potential to send stock prices into disarray, and cripple the agricultural system even more.

Loss of these grains also have the potential to make livestock feed scarce or send feed prices soaring. My suggestion? Stock up now if your feed sources aren’t sourced locally or from an area that’s not in the mid-west. Yes, even chicken feed.

If you purchase beef or pork from the store, you’re more than likely going to see a decrease in grocery store meat production (specifically beef) and a soar in pricing, depending on your location and where your grocer sources these meat products. If at all possible, consider purchasing a cow or pig share if you can’t grow your own. Or start sourcing out from local homesteaders and farmers. It’s healthier for you anyway!

More and more farmers going into bankruptcy or not saving their farms means an economic drop. It also means that large organizations (not necessarily good ones) will gain more and more control of our food system because they can produce the supply for the demand with farms outside of the United States. We are no longer supporting the American farmer, we are simply trying to feed the American people who think it’s the grocery store’s job to feed them. And unfortunately, it will cripple our agriculture system even more. In the end, this has a major impact on our economy and our food source. And this is were sloppy farming runs rampant with recalls, filthy living conditions for livestock, and lack of integrity.

How Should You Prepare?

Let’s get real here, this isn’t over yet. The National Oceanic and Atmospheric Association (NOAA) released a report in March with a map showing the expected flooding and moisture for the rest of Spring 2019. And folks, it’s not good.

From someone who lost an entire garden last year on the East Coast due to constant rains and flooding, let me be the first to tell you that even if you know how to grow your own food, you might not be able to. We’re learning to put things in place on our homestead that will help with the rain, like drains, water diverts through the garden, and utilizing a greenhouse. But sometimes no matter what you do, you’ll still lose crops. This is why it’s so important to dive into your local homesteading community and network with others. What you might not be able to grow, someone else one county over might grow in abundance. And the opposite is true as well.

Homesteading takes a village—don’t be afraid of that village. Love on it, grow it, utilize it. And in return, let others utilize your talents and abundance as well. This is how homesteading always has been, and should continue to be.

Last year we bought bushels of tomatoes and apples from a local orchard to restock our pantry for the coming year. Find out now who those homesteaders and farms are so that you can help one another in the future. If you’re not interested in reaching out to others, then start packing your pantry with food now that’s easy—like home canned beans.

The map above shows areas that are expected to receive major, moderate, or minor flooding this year. Unfortunately last year, Virginia (where I live) wasn’t even in a minor zone, and yet we saw flood after flood after flood in 2018. It makes me wonder what we can truly expect in 2019.

Besides the garden, you need to prepare your livestock and take good inventory of your escape routes. When possible, move livestock to higher ground when you know a large storm is coming. If not possible, consider keeping sandbags on hand and offering an escape should the flood waters start rising quicker than you can get to your livestock.

More importantly, know your own escape routes. Livestock are replaceable, you are not. Where I live, we have rivers on every single side of us. Thankfully we live on a hillside that wouldn’t flood. But what about if the flooding happens while we’re not home and we can’t get home? Consider keeping a go-bag (water and snacks) in your vehicles, along with mud boots, blankets, and ponchos. You never want to get stranded, especially with children, during flooding. And as always, please practice the “turn around don’t drown” rule.

How Can You Help?

If you’d like to donate to help farms, ranches, and communities areas affected by the Nebraska floods, consider donating to the Nebraska Farm Bureau disaster assistance fund. All of the proceeds received go towards rebuilding these farms and communities that have been devastated by the flooding that has happened, and that has yet to happen.

Please consider sharing this article with others. Unfortunately the media is not giving nearly enough attention to the devastation that is occurring, and will continue to occur, for these precious farmers and farms in the mid-west. The impact that it not only has on them and their families, but also the rest of the country, is extremely important to talk about right now. Knowledge is power! 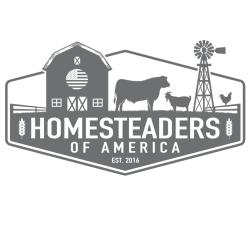 Amy K. Fewell
Founder of Homesteaders of America. Author, blogger, podcaster, YouTube, and entrepreneur over at The Fewell Homestead -- http://www.thefewellhomestead.com

9 Comments on Nebraska Floods: How It Affects Everyone