Building a DIY milking stand is quite easy and very necessary if you plan to raise goats.  Not only will you use the milking stand when milking the goat, but it can easily be used as a grooming stand as well. Without a designated stand you’ll have a hard time convincing a goat that it needs to stand still long enough to trim its hooves!

Learn if now is the right time for you to start raising goats!

You’ve finally made the decision to bring goats onto the homestead. Whether it’s for milking or to work the land, you will quickly realize that the easiest way to handle them will be on the milking stand.  The stand is definitely worth the time invested in constructing it, and you’ll find yourself using it often. 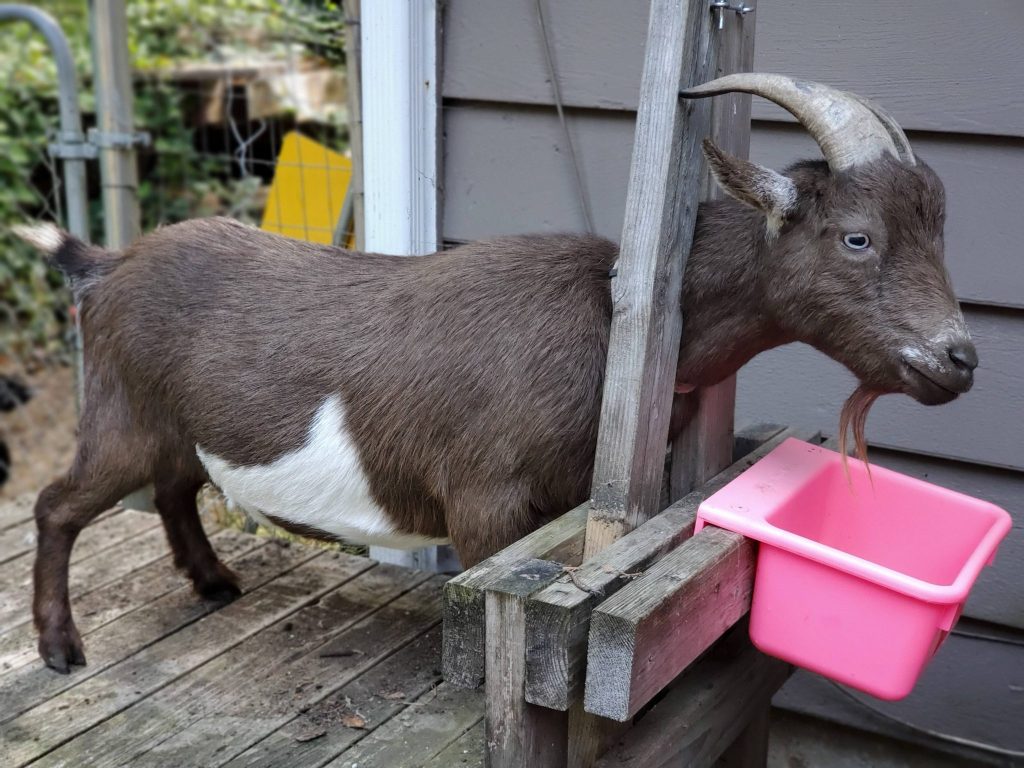 Building the stand is quite simple, and it can be constructed in true homesteading fashion.  This stand was constructed using 80% reclaimed or recycled material from various places or other builds.  With lumber cost being quite high, the best location to find material would be on Craigslist, at construction sites, or even through buy nothing groups on Facebook.  Let friends and family know that you are looking for material and they will often keep an eye out, helping you to keep construction costs down.

The stand we built is simple, sturdy and wide enough that it will not tip over.  4×4’s were used for the legs which were cut to be 16 inches high.   Though it’s not necessary, we add triangle cuts attached to the corner of the leg to the frame for added sturdiness.

The head locking devise was made with 2×4’s, one side is solid and does not move.  The other is held in place with a carriage bolt, allowing it to move side to side, locking the head in place.

When constructing the head clamp you’ll want to take measurements from a few members of your herd, splitting the difference between the smallest herd member to the largest.  A carriage bolt acts as a hinge for the moving side of the head clamp.  To prevent the clamp from opening, a simple hook latch was added.

Even though the goat is secured to the platform it’s important to keep them occupied while they are there. With this in mind, the use of a feed bucket filled with treats will do just that.  The bucket is held into place using 2×4’s with a half inch gap between them, created by stacking washers around the screws fastening the 2×4’s together.

Currently, the milking stand is placed against the wall of the barn. Once railings are added to both  sides it will be moved to a more permanent location. Are railing necessary? In the event that a goat attempts to step off the platform the rails will preventing any possible injury.

Furthermore, this project has saved us a LOT of backaches. Not to mention, it is less stressful for the goats during handling.  We strongly suggest you have a milking stand constructed prior to bringing goats onto the homestead, helping them to be comfortable with it as young kids.

Building a DIY Milking Stand From a Pallet

Another option for building an economical stanchion for your dairy goat is to use a pallet! Check out this quick tutorial to learn how!