Learn the basics of making sourdough bread at home from the sourdough starter to a delicious sourdough sandwich bread. Because there’s not much better than starting the day with a slice of sourdough bread with a generous dollop of homemade sugar-free jam!

Ever wonder how bread was made before those nifty little packets of yeast came along? Or maybe you’ve wondered what leaven the people of God were instructed to get rid of during the Feast of Unleavened Bread? Surely not the little packets! So what then? Let me try to explain.

To put it as simply as possible, modern yeast is produced in a laboratory while a sourdough starter is produced at home by capturing the wild yeasts and bacteria in the environment around it. Modern yeast is a somewhat pricey and consumable product, meaning it will only last for a single use. Our first fast food if you will. Natural leaven on the other hand is free, and can last indefinitely.

Just like most traditional food preparation methods, sourdough has its benefits (beyond free yeast!). Every seed contains phytic acid, which is essential to the sprouting process. For some people however, phytic acid can bind to minerals in the gut, making them useless, thus resulting in allergies and other imbalances. Because soaking grains breaks down the gluten and neutralizes phytic acid and enzyme inhibitors, true sourdough products are usually much easier to digest, and more gentle on the stomach

How To Get Started Making Sourdough Bread

Sourdough starters may be purchased fresh, frozen, or dehydrated. Maybe you have a friend that is willing to give you some starter? Or perhaps you’d rather just make your own? Assuming the latter is true, here is a quick method to getting a starter going.

Fresh ground, whole grain flour is best – something that contains gluten. Wheat, rye, spelt, kamut, etc. The only other ingredient is filtered or well water. Though a starter can last for generations, I choose to make a new one every year after the Feast of Unleavened Bread, just like God’s people did in the bible. Making a new starter year after year helps keep it balanced, and gives lots of practice learning which way works best for your particular situation.

Starters may be started indoors, however it is nice to begin them outside in the spring, after the Feast, when the days are mild. In our area it’s usually still pretty cold at night during this time of the year, so I prefer to keep my starter inside over night.

It’s better to start with less water at first, adding more as needed. You are looking for a thicker mixture – thicker than pancake batter but thinner than biscuit dough! You should be able to stir it easily, yet it should not be runny.

Mix well, pour into a clean quart-size mason jar, cover, and set outside in the shade. I prefer to use an unbleached coffee filter and rubber band for a cover, however a paper towel, cheesecloth, bread towel, or some other kind of breathable fabric and a rubber band will do just as well. This keeps the bad critters out while allowing the good ones in.

After about 12 more hours (now your are at about 24 hours), look at your starter again. If you did not see bubbles before, you should see at least a few now. If there are still no bubbles, start over. I have never had this happen to me, but it’s possible. Assuming you see at least a few more bubbles, repeat #1, but this time setting it back outside in the shade.

Continue in this same way, dumping out half and feeding fresh flour and water, morning (put outside in the shade!) and evening (bring inside!), every 12 hours, until the starter is consistently filled with bubbles and has significant rise to it in between each feeding (it will rise and fall back down in 12 hours or less).

When the starter is doubling (or more!) in size consistently, it is strong enough to use as leaven. This should take anywhere from 5 days to 1.5 weeks. If you are not sure, it is best to continue the above feeding routine even up to 2 or three weeks to strengthen the starter … however a week or so should be fine.

Congratulations – you have 1/2 to 1 cup of sourdough starter!

Now what? We’ll begin with a basic sourdough sandwich bread. Nothing fancy.

Building Up The Starter

A general guideline for making sourdough bread is this: figure on one cup of starter for each 1 ½ pound loaf of bread. But you only have 1/2 to 1 cup and you need some left over to save for next time! Solution: you will have to build it up.

A common, but somewhat flexible, practice for building up a starter is, do not add more than three times the amount of flour. So, let’s say you have 1 cup of starter. You may add up to 3 cups of flour and however much water is needed to achieve the thicker batter consistency. You will need 2 cups of starter for two loaves of bread. Add 2 cups of flour and almost 2 cups of water to your starter the evening before you want to make bread. Let it do its thing over night, and in the morning you will have a nice amount of starter (it ALL becomes starter – remember, a little leaven leavens the whole lump).

As soon as you are able to in the morning, measure out 2 cups of starter for the bread dough. For bread, it’s best to catch the starter right after it ‘domes’ (gets to the highest point in rising) or shortly after. This is when the starter is the most active. However, waiting until it goes all the way back down is okay too; just try to use it before about 12 hours is up.

Now how much is left? All you need to save back for next time is about 1/4 cup -1/2 cup. You may build this up again for other sourdough items (pancakes? waffles? cinnamon rolls? crackers? English muffins?) and save back some after the next batch is ready, or you may simply save back your 1/4 c-1/2 c now and compost what little remains.

Whatever the case, always be sure you have enough starter for next time! I prefer to feed what is saved back before returning it to the refrigerator (I use my starter about once a week, so I keep it in the fridge. However starters that are used daily or every-other-day may stay out perpetually on the counter). Either way, take your 1/4 c-1/2 c starter and feed it an equal amount of flour (1/4 c-1/2 c) and enough water for that same, thicker batter. Store in a mason jar covered with plastic wrap and a rubber band. If you are storing it in the refrigerator, leave it out on the counter until you see it rise and begin to fall back down. If you are storing it on the counter, you are done. 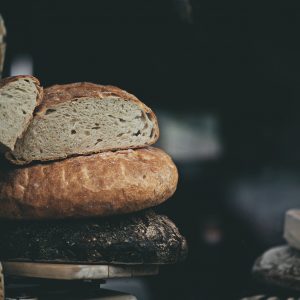 If you are an experienced bread maker, here I can just say make bread as usual, adding more unbleached flour until you achieve a nice, soft, somewhat firm, springy, not-very-sticky dough. If you are not experienced at making bread, this will be a trial and error process. I suggest taking notes to reference back on, and practicing at least once a week, preferably more, until you get the hang of it.
Keyword bread, sandwich, sourdough

Want something else? Use your imagination. For instance, if you’d rather have dinner rolls, simply make a bunch of little balls and line them all up in a greased and floured 9”x13” cake pan. Dinner rolls are best made with extra fat! Bread sticks? Divide the dough into several balls, roll each ball into a stick, place the sticks on a baking sheet lined with parchment. Brush with butter, salt, garlic, Parmesan cheese, etc. before baking. The same method works well for cinnamon rolls too; just add extra fat and extra sweetener, proceed on with the steps in a typical cinnamon roll recipe. A side note, it’s fun to add melted butter, brown sugar or coconut sugar, cinnamon, and pecans/walnuts to the bottom of the pan before putting in the cinnamon rolls. When finished baking, turn the pan upside down on to a plate or board, and now you have sticky buns.

The texture of the bread is at its best for the first few days. As time goes on it will become a little dryer and crumbier. We’ve found that the recipe given above, with the optional fat and honey, makes a softer loaf all around. Whatever the case, once the bread begins to show obvious signs of aging, we like it best toasted with butter.

Keep in mind that there are as many ways to handle sourdough bread as there are opinions! What works for me or for your experienced friend may not work for you. Practice brings experience and familiarity. If at first you do not succeed, do not give up! Keep trying regularly and you will soon learn what works best for you.

Joanne Smith and her family own Heritage Homestead, located in Missouri. You can follow their adventures on their YouTube Channel.